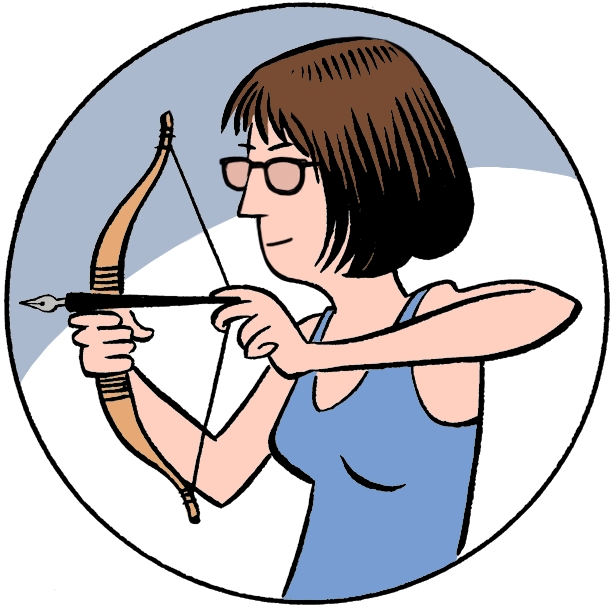 Carol Lay has created comics and illustrations for many publications including Bongo Comics, The Wall Street Journal, and The New Yorker.  Her weekly comic strip, Lay Lines, can be seen on gocomics.com

A few months into her captivity, Fran made a decision to change her behavior. She would stop crying, for one thing—it was exhausting. Pacing the cornerless, windowless white room probably telegraphed anxiety, so she would jog, do sit-ups, or perform some other activity that would burn off stress and pump blood. Meditation and yoga (or a reasonable facsimile) would help her keep what was left of her sanity. She would eat the odd food that materialized on the low platform three times a day, and go ahead and watch the entertainments and read the books that appeared on the familiar-looking tablet device. Instead of trying to shield herself while bathing or changing clothes, she would reject her old notions of modesty and own her skin and body, stretch marks and all. The captors probably didn’t see her as a sexual object, anyway, being aliens.

Fran couldn’t see any cameras in the room, but she knew she was being observed and analyzed. She knew because whenever she needed something—water, medications, tampons—those things would appear. And things she wanted appeared more readily once she relaxed into her situation. It was as if her captors could read her mind better when it was freer of black thoughts.

One day she woke to find a man in her quarters. Of course she had longed for a companion, but this man would not have been her first choice. Or thousandth. He radiated stupidity and meanness. If he hadn’t been so frightened he might have started beating on her, just for sport. Fran made her fear and contempt clear by vomiting and hiding. When she emerged from under her blanket the man was gone. She hoped the aliens hadn’t killed him, but for the first time in months, she was glad to be alone.

She was happy to be rid of the brute—but soon her captors gave her another human. This one was a young girl who looked much like her daughter Beth, and Fran wondered if she might be Beth, but without her daughter’s memories. A clone, perhaps? It didn’t matter—the girl’s presence flooded the desperate young mother with hope and purpose. The two bonded quickly while Fran comforted the scared girl and explained in the gentlest terms what was happening.

As she spoke, Fran recognized the connection between serenity and reward. Were the aliens conditioning her to be an obedient pet? Was she an experiment, or a test subject they could study in order to conquer Earth? She could resist her masters and introduce chaos by getting drunk and acting horribly, but she wasn’t that kind of person. What would be the point of such resistance? These beings were obviously her superiors, but apart from stealing her from her home, family, and the world she was connected to in her DNA, they seemed to want to please her.

So Fran and Beth made the best of their situation. They meditated, learned to play music and paint, and generally kept their minds occupied with higher things. Fran’s husband appeared one day, which upset her at first because he was dead. But she decided he was a gift, so she accepted and treasured him. As serenity flourished their quarters expanded, morphing into a spacious old house in the country. Then it became part of a village of charming homes. People appeared out of nowhere to fill the houses and Fran and her family helped them integrate into their growing community. Gardens, animals, tools, carriages, and festivities—all appeared as if they had always been. When rain finally fell from dark clouds, Fran ran out into it naked and laughing with joy.

The introduction of seasons helped Fran keep track of years. She didn’t look or feel any older than when she had first come to in that embryonic white and barren chamber. So much had happened, time must have passed. But the children hadn’t aged, and animals and people didn’t die. A dark cloud formed in Fran’s mind for the first time in a long while. Was she a pampered creature in the alien zoo or was she hallucinating a heaven in her last nanosecond of life?

Fran looked around and decided the answer didn’t matter. She was happy.